Here I am again. Didn’t I promise it? I did, but you might be surprised by the very short intervals between my blog entries now. Well, you must always remain surprising. This entry covers the period from Manu’s arrival until last week because that’s when Silvio Junger II. was written. As I don’t really know where to start I will just write about the events that pop into my head, so don’t expect anything to be in chronological order or any other sort of system.

For example I remember being on the Metropol Parasol. Actually we’ve been there twice. The first time I was with Jenny and Dave, the second time Sarah replaced Dave. The Metropol Parasol is a strange building in the middle of Seville which you can take a lift to the top of, and then walk around and drink some cocktails. It’s hard to explain, so look at the picture below. However, the flair up there is pretty cool but for some reason, nobody wanted to drink a cocktail, although they only cost € 5! The second time up there, at least Jenny and Sarah stayed with me so I could drink a “Sevilla sunset”. As the Spanish would say: Maravilloso.

Another trip I remember is our visit to the bullfighting arena. Again, Manu didn’t join us so Sarah, Jenny and I were on our own. Initially we hoped we could get in there for free because a poster in the Samay hostel says so but this turned out to be wrong. What a pity. So, we took part in a tour through the museum and the arena itself. Unlike in other parts of Spain, for example Catalonia, bullfights are still quite popular in Andalusia, but none of them take place in summer, so we didn’t even have the chance to watch one. But in the news we saw how in the framework of the bull runs in other parts of Spain, bulls trampled on people and took them on their horns and other horrible things like that. I really do not understand why someone would participate.

The next thing I can think of is the Torre de Oro. As I learned from Manu, the tower got its name because of its reflection in the river, which appears golden. (It actually does, I can confirm it.) I went there one Monday together with Sarah, and the tower was actually free of entry charges. In the course of the centuries, the tower has been used for many different purposes, nowadays there is a naval museum inside. Cool museum, thumbs up.

Speaking of museums. One of the few activities we all did together was the “Museo de las Bellas Artes” which is one of my favourite art museums now. Everything is cool about it, the buildings (yeah, there were several, one of them even looked like a whole cathedral), the courtyards, the paintings, the sculptures, everything. We spent quite a lot of time in there but it was totally worth it.

After leaving the museum, Manu and I searched for a jamon store, because I wanted to take one of the famous Spanish knuckles of pork home. I bought a 100 % Iberico where the pigs only got acorns to eat. I am really looking forward to eating it at home!

One Saturday, Manu and I went on a trip to Córdoba. This trip seems to be obligatory as every single Erasmus student went there. In order to do anything special so that we could write something in the blog no one else has written so far, we used BlaBlaCar to get there. In case you don’t know, that’s an online platform where you can book seats in someone else’s car. Although our requests got cancelled a few times it finally worked perfectly. Manu got us in a slightly inconvenient situation when he didn’t understand our driver on our way back when he asked if the temperature was fine and Manu accidently assumed he was talking about the weather and told him it was very hot… Consequently Manolo (that’s the driver) turned up the air conditioning as much as possible, which lead to a freezing drive. (Of course, I completely understood Manolo’s question but I said nothing because I wanted to give Manu the opportunity to learn from his mistake.) What did we do in Córdoba, you ask? Surprisingly, we did not visit the Mezquita, because I have already seen it twice and Manu didn’t want to pay the € 10 entry fee either so we decided that inspecting it from the outside is enough. Instead, we visited another museum about the cohabitation of three different religions or cultures in Córdoba over several centuries. We also spent quite some time wandering through the city (and discussing the best way to climb up the wall of a certain building) and had a look at the jungle which is supposed to be a river. It looked more like a jungle, though.

On Manu’s first Sunday in Sevilla, we went to a local swimming pool and spent our day there as this was the hottest time of the year. The waterslides were completely overloaded but the wave pool was quite cool. Not as cool was the food there which was totally overpriced and didn’t even taste good. If we had known that we would definitely have brought our own food.

Right now, I cannot think of anything else that’s interesting enough for you to hear. Probably, some events I have forgotten now will pop into my mind in the next days but that’s unavoidable, I guess.

I had almost forgotten to mention the Flamenco show we attended one day. It took place in the "Casa de la guitarra" and we were joined by a colleague of Jenny and Sarah's. The hall also included a collection of guitars, the oldest of which is dated 1803. The show itself was very entertaining, covering music, singing and dance.

Now that I can tick the Flamenco show on my checklist (of course, that's figuratively speaking) I can really finish this entry.

I am coming home soon, but I will write another blog before that, I promise. 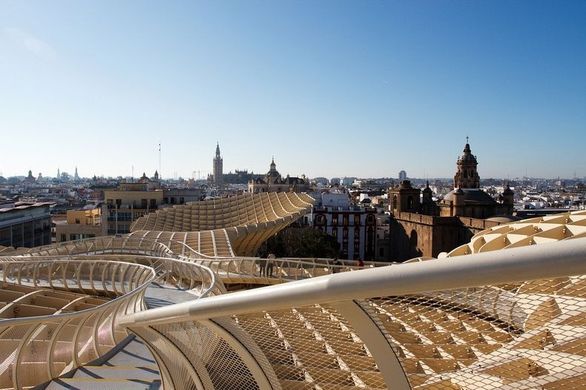 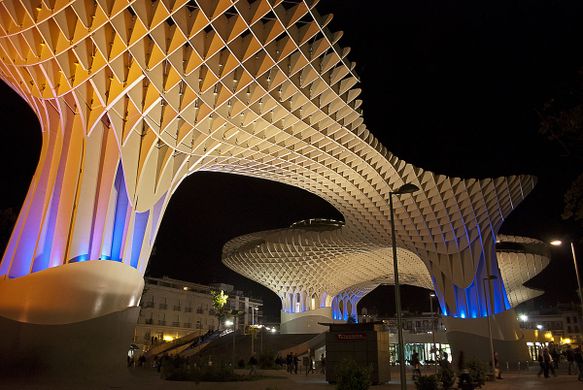 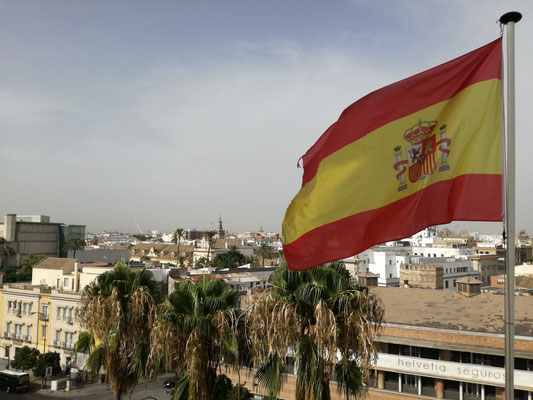 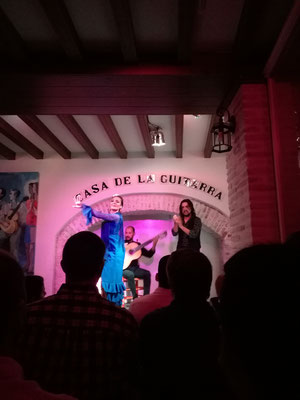